Here is wishing my amazing readers a happy and purposeful new year. Well, I have wished some of you a happy new year personally but this is an official new year post for everyone with some juicy updates and a word of encouragement. So read on  =====>>

So I was MIA for some weeks just before Christmas and I reappeared during the festivities to drop a quick Christmas greeting and off I went again. So what’s been up with me all this while? Why have I been off and on?

At the beginning of November 2015, I went on my annual leave which was to last till the end of the year (don’t ask me where I work, lol). And then the drama began ☺☺☺

First of all I noticed Mum was preparing for something, I didn’t even know what it was but I suspected it had to do with me. I didn’t want to probe but the curiosity bug bit me and I did probe. She eventually told me an introduction* date had been fixed.

Meanwhile, Mons. Tee mentioned something of the sort to me in passing. But I brushed it off as a thought that was not yet finalised. You know , I felt I needed to be carried along if an introduction would be taking place. I mean, if we didn’t have a relationship going on, there won’t be an introduction.

So, it was a shocker for me when mum told me it was in three weeks time. Like seriously, who plans an introduction behind the would-be-bride? So I vented out my disappointment to Mons. Tee, who sounded so morose** and sorry. Well, it wasn’t my fault, I felt I needed to let him know before they go and fix a wedding date and inform me a month to my wedding. Lol, that’s what I was thinking…

But my major concern about the date was that Mons. Tee was so far away he wasn’t going to make it down. I know people do introductions in the absence of one (or even both) of the intending couple but I wasn’t sure I liked the idea. I mentioned this a few times to Mons. Tee but I understood he was too sudden and he was already tied down with work. Although I was being reasonable, I wasn’t so enthusiastic about the introduction. I wondered what it would look like sitting all alone….

Then on the 26th of November (introduction was on the 28th), I was sitting in the sitting room with one of my little ones and Mons. Tee walks in. Seriously? Is this some awesome trick? What’s going on here? You’re supposed to be in Loughborough busy?

I’m telling you all these questions were running through my mind at the same time. I was overwhelmed and suddenly felt shy (mum and a few others were there). I didn’t even think of a hug until he prompted me, I was indeed overwhelmed. He actually came, he didn’t leave me hanging, he had all this planned up way before I was informed and that’s why I wasn’t carried along.

AND THEN HE PROPOSED!!! Right there in the living room before my mum and a few of our siblings and relatives with the most remarkable line ever

“Would you accept Jesus’ will for me to marry you?” 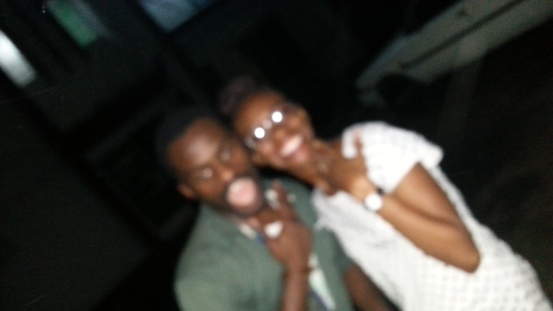 Sounded cheeky, but genuine. I knew he meant every word of it and the peace that flooded my heart still flows.

* It is a Nigerian tradition. Basically a formal meeting of both families of intending couples to get to know each other and eventually fix a wedding date.

** Well, this is a word we use to describe each other when we sound or look like we’re down or unhappy.

5 thoughts on “New Year with Some Updates (engagement, introduction…)”